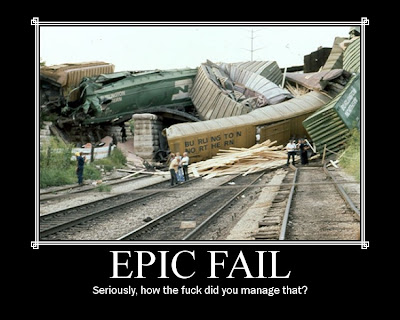 Ok I just finished off my Rohatsu retreat, a week late. Sitting at home following along with Jundo’s totally contrived Zen show. I will follow up on comments and stuff I got while I was in retreat later; I just wanted to get this stuff out while it was semi-fresh and stinking like the turd that it is.

On to the failure and success of the retreat! Ok, I prepared the family Friday night by saying I am doing a retreat this weekend, there are work periods, so I’ll help out around the house during that time.” Then I sat until a little after 0140. (After I had been up since 0430 Friday, I had also run a PFT and was a bit sore) When I got up Saturday I went straight to the cushion, did my “samu” and did night sitting” again till about 0240 again, Sunday more of the same until about 30 minutes before the next eating/ working period. I had become hell. Mara was whispering in my ear telling me how totally cool and zen I was and it was sounding pretty sweet. And my “dakini”, Megumi was the catalyst for Mara to call victory over me. The wife was pissed since my folks are coming and she is uneasy about them coming and wants to make them as comfortable as we can when they come up from Texas. I was busy being a ZaZen God and did not want to be cheated out of my ZaZen. There was a large uncontrolled explosion of emotion resulting in tears, and a house full of pissed off women. Total train wreck. Wow, what a dick.

All the evil karma ever committed by me since of old,
On account of greed, anger, and folly, which have no beginning,
Born of my body, mouth, and thought - I now make full open confession of it. 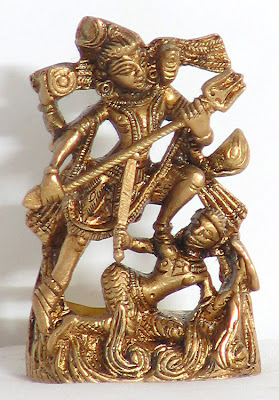 I got better though, and so did they.. Had a great talk about a lot of the stuff that had bubbled up, got up, and started working on the house in an extended samu period. Ate dinner with the family and finished the sitting with equanimity restored. And as a bonus I think the next time I say I want to “Go” to a retreat the family might not be as resistant to me leaving the house for a weekend retreat in future.

Oh, and the retreat must have been good, because Jesus is following Me now! 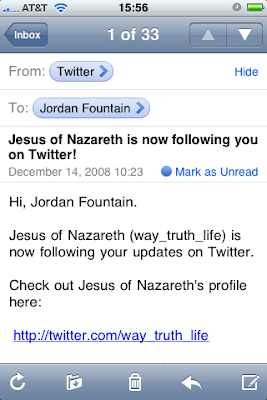 His Bio says " A lot more like Buddha thank you thought. Wish more people today understood my message. We are all One."

May you be well and happy,
Jordan
Posted by SlowZen at Sunday, December 14, 2008

Email ThisBlogThis!Share to TwitterShare to FacebookShare to Pinterest
Labels: experiances

Sorry, Jordan, but I'm with Megumi on this one! If you're Dad had "meditated" all day with all there is to do around here I can assure you that he would have "meditated" permanently somewhere else far, far away from now on!

Can't wait to see you!

Hi Mom, Don't be sorry. Your right to be with Megumi. I think Dad is usually meditating all day, but that is another story all together!

Thanks for stopping by.
Jordan

In fact, everyone in your household attained your inherent, perfect stupidity.

So that's a great blessing.

I'm always amazed at how the desire to *get* something from practice blinds us to what we actually need to *give* from our practice.

Zen Master Seung Sahn used to say, "You must become 100% stupid!" Actually, he used to shout it - more than once to me.

So you've gotten a great gift. Now, how shall you use it?

Jordan, Congrats! Your weekend really did sound epic! Success and failure, comedy and drama, pain and pleasure, and an auspicious visit by a famous dead guy. I should be so fortunate.

Barry,
Sounds like you had a great ZaZen coach!
I will use my stupidity as wisely as I can.

Yeah, I did not remember sending the invite to Mara for the retreet, but all are always welcome!

Thanks for stopping by!
Jordan

Heehee. Thanks for sharing the follies of the retreat. Wow. I am impressed you pulled it off. Don't think I would be so talented to pull it off with husband and stepkids here. Kudos to you for getting it in!
Peace,
Molly

Thanks for the kind words and the kudos!
I do not think I will try that again... for a while.

Curator, I don't know how to respond to that comment, but thank you for stopping in.

Jordans,
Congratulations. Sounds like everything went just as it should.