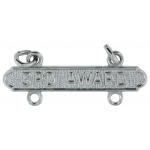 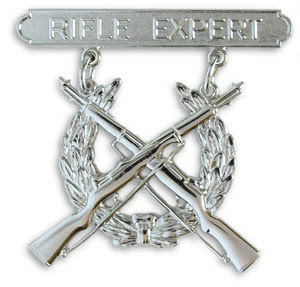 I came out of the field last night.
Mission accomplished. I shot Expert on the Rifle, Sharpshooter on the Pistol.
It got me thinking about relative reality.

Marines are pretty great. To include the reservists that make up my present company.
Reservists consistently surprise me with there ability to improvise, and overcome obstacles.
In the regular Marine Corps we spend about two weeks out of the year on rifle qualification.
The reserves do that in four days. No it is not in any way as thorough as they do on the active duty side, but they get the Job done.

Anyhow I have also been considering the rifle “Qualifications”
There are three basic badges. Marksman (being the lowest), Sharpshooter (the Mid grade) and Expert (the highest, until you get into distinguished marksman)
But even the lowly (by Marine standards) Marksman is a pretty darned good shot. Anyone who can hit a man-sized target from 5 football fields away without the use of optics deserves props in my book. Particularly with the reservists who are doing this with minimal prep time, they just check out a weapon and go qualify.
I think this is truly magnificent.

In other news, it was good to get back to my little round cushion, doting daughters and wife, hyper dog, and possessive cat.
Now I have to squeeze a months worth of work into the rest of today to meet a requirement.
I guess that is how my reserve counterparts feel every weekend.

How great that you recognize your fellow Marines in the reserve!

Beautiful weather here! We're going out to shop for a bit!

Can't wait to you all of you here in hardly a month!
Love,

Hi Mom,
I have really come to appreciate the reservists I work with.

I enjoyed your chick picks!

Thank you for sharing this.
Omedeto Goziemasu (Japanese: Congratulations---I don't know the romaji, but I tried to sound it out)

Your post put me into thoughts of one of my good and great friends (and teachers - of writing, and of living). His name is David Gugich. He is a published Northwest poet (and he wrote the foreword for my book).

He spent 3 years in the US Marine corps, 26 months of which were spent in Viet Nam.

One of his poems was read on national TV on Veterans Day at the Viet Nam War Memorial (the wall) about 5 or 6 years ago.

That poem came from his second book, The Unwilling: Poems of the Viet Nam War. It was published in 1992 (Winning the Bumbershoot Bookfair Award that same year).

The Author's Note states, "Most of the poems of this collection were written between 1966 and 1968 while I was serving with the First Reconnaissance Battalion, First Marine Division, in the Republic of South Viet Nam.

Your post made me think about one of his poems... It has a certain "Buddhist" kind of quality to it. I will type it here, see what you think.

First, allow me to post his Dedication in full:

In memory of those I served with who lost their lives in the jungle of Viet Nam, and to all those, living and gone, who paid the price:

And here is the poem:

Soldiers, young men in prime of youth,
Face the enemy, then learn the truth
Of where the enemy really lies.
He sees Maya's dance in symbolic resonance
Through the heart of youth
In emotion's tone-images of universal truth!

Like relativity, universal constant,
Speed of light: one hundred and eighty six
Thousand three hundred feet per second
velocity
To profound insight.
As tungsten pure makes fine filament,
Like tungsten crystalline electron optics,
Electromicroscopic:
Nine atoms in a space lattice.
Geometric patterns
Against a crystal cube so bright,
Wherein bombarding molecules of air
Appear as dancing points of light
Similar to sunlight glimmering
On moving waters of the soul's insight -
Like tungsten optics, two ways to see the enemy.
Like a double refracting crystal
Breaking up light beams in two different
Images and polarity.
Like the atom, the soul, self-possessed in duality,
Must focus with the single eye
To clearly see the enemy:
There is no world, no marketplace
Where men can give the love of their souls
To those of different-shaded face.
We share not the world,
Much less humanity!

Soldiers, young men in prime of youth
Now have faced the truth
And the enemy is a human soul,
Yet war is still a suckled death!
He sees a sudden far-off glint
Of an ideal or a principle,
Now kicking dust into the satin lace
Of a fading sunset that had been his youth.
He cries: "Farewell, my love!"

Hi Ted, thanks for stopping in.