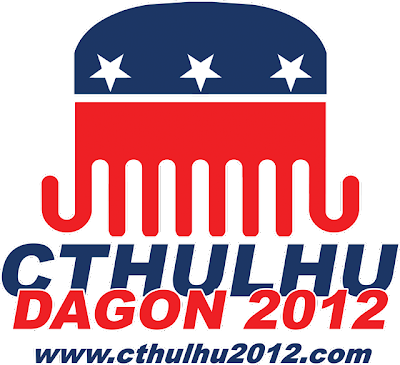 Wow! I forgot to mention yesterday that while I was out in VA I had a chance to look at some of our various so called news channels.  What a waste of time that was.  So much political polarization and opinion that the facts seem to have become secondary to opinion.
Ok enough of that.  Out of 600 people visiting this site last week only six took the poll I had up.  I guess you all folks don't like polls much.
Family sat together for a bit this morning,  ZMI found some chocolate and was gnawing on that on the zafu.  Time to go to Lowe's and price flooring. Joy!
Posted by SlowZen at Sunday, April 19, 2009

I tried going to the site to take the poll but didn't understand how it worked. Sorry about that!
But glad you're home and safe!

Hey Mom,
Don't be sorry!
It is good to be home.

*this was published prior to the selection of Dagon as running mate.
Political Positions
I have received a few inquiries about the Great Cthulhu's platform, and so I have attempted to answer all such questions. If you have any questions please send them to the policy and platform committee (policies AT cthulhu DOT org), or send suggestions for stances if you have any.

Q) What is your candidates stand on abortion? Will it/he/she merely outlaw human life itself and thus end the issue?

A) The Great Cthulhu cares little for mortal affairs and mortal politics. However, as a presidential candidate, it must take a stand. Cthulhu is, therefore, pro-choice because it cares little for what you do. However, it's in favor of keeping humans alive, so that it can taunt and toy with them before they go insane and it eats them.

Q) What is the canidate's position on campaign finances?

A) Cthulhu accepts any donation which a citizen wishes to make. It doesn't oppose contributions from organizations, conglomerates, or conspiracies. In fact, it accepts any and all types of financial assistance or other donations. Preferably, large quantities of currency will be sent along with human brains,other donated organs, or your first born.

Q)We were wondering what great Cthulhu's stance was on foreign policy/ foreign aid?

A) The Great Cthulhu views our foreign neighbors as equals to the United States. It encourages trade in all forms, including slave trade, child trafficking, and it will continue to give Primary Trading Partner status to the country which sells the most children worldwide. Cthulhu will provide support to those countries which do not commit any of the following acts:

* Population control. The more humans alive, the more for it to toy with, drive insane, or puree.
* Genocide: See above.
* Captial Punishment: See above.

Q)What would the Great Leader's position be on the U.S. Military? Would we see a shift away from cooperative multi-lateralism with the United Nations? How does the Great Leader feel about nuclear weapons?

A) Our future leader would ban a standing U.S. Military. Cthulhu does not feel that humans should have the privilege oo killing other humans, it reserves that right to itself.
The Great Cthulhu's solution to the United Nations will be to eat all current U.N. delegates. It will then build the U.U.N. (Unilateral United Nations)
Our Great Leader is greatly opposed to nuclear weapons in the possession of others, because the melting of human flesh, and mass destruction, are not mortal rights.

Q) What is Great Cthulhu's position on obvious cult fronts (such as Microsoft, Lego and most gaming companies); will he/she/it treat them as previous administrations have? (i.e. pretend they don't exist or support them/crack down on them) Also and more important will he treat all cultists equally, or give his particular thrill kill cultists preference leaving (for example) shub-niggurath disciples such as Clarence Thomas and Bob Packwood out in the cold?

A) Good question. Within the first 100 days of its reign, the Great Cthulhu pledges to destroy the following cults:

Cthulhu cultists will be given the following priveleges:

* They will die last.

Q) What solution does your candidate have for the problem of massive overspending by the government on the poor and elderly. Does he have a way to free up this money for other important projects, like going to mars or building big guns.

A) The Great Cthulhu's solution to massive overspending by the government on the weak, will be to go right to the heart of the problem, by destroying the elderly, poor, and clinically insane. It does not need a big gun, and Mars will be eaten immediately following Earth's demise.

Q)My roommate, being a concientious citizen of the US, would like to know who wil l The Illustrious One's running mate be. And how will he solve the national deb t. I've told him, debt will no longer be a concern for his merely mortal mind t o ponder. Now, my concern, as a citizen of a foriegn country, how will Cthulhu rule my country as well. Please see to it that It is given more money for bombs and other implements of destruction. Will Cthulhu use psychic powers to drive u s all mad, or must a study be made of this?

As of yet, the almighty Cthulhu has not chosen a running mate. If you feel you know a good candidate, or perhaps you've eaten one lately, please submit your candidate suggestions to: runningmate AT cthulhu DOT org

As stated above, Cthulhu will treat all countries in the same manner as it treats the United States. No study will be needed, since to merely gaze upon it is insanity itself.

Q) What is the candidates stand on welfare? I think all of the bums should be eaten by mister cthulhu.

A) You are wise. You will be eaten second to last.

Q)How will Cthulhu deal with a strongly bipartisan Congress? How does Cthulhu plan to deal with the budget deficit? Has Cthulhu yet chosen a running mate? If so, who is it, and from whence did it come? Given that the candidate is now dead and dreaming in the Pacific, what measures will be taken to speed its awakening should it be elected president?

A) Cthulhu will have no problem dealing with Congress, as they will be the first to be eaten. The budget deficit will shrink drastically once Cthulhu cuts unnecessary spendings like Defense, Welfare and Social Security. Mass support of Cthulhu will raise the its awareness of the need to take control of our suffering country, and should lead to its return. The Great Cthulhu will awaken in time to take its presidential oath.

Q) Just what does Cthulhu think of the institution in corporate America known as the "power lunch"? Out here in California, it is often held at a Japanese restaurant and features sashimi (raw fish), tempura-fried vegetables, teriyaki chicken or beef, tonkatsu (a type of breaded pork chop) and/or sushi. Would it continue to be deductible under the IRS regulations if he were elected?

A) The Great Cthulhu is opposed to any an other such institutions. They sound way too nice. Anyone caught committing such a henious act will suffer multiple seconds of torture before being destroyed.

Q)If Great Cthulhu becomes president, we obviously would all go mad. Do we get to choose which particular pathological condition we are blessed with, or does the big C just roll a d100 and we get what we're given? Also: He's been dead but dreaming for quite a bit of time now. What's to say He's not going to be a bit sleepy when he wakes up? I mean, how's a Priest of the Old Ones supposed to destroy a world effectively if He's half-asleep for goodness sake?!

A) The Great Cthulhu will not give humans that kind of decision over their own fate. They are far too weak to be able to handle that kind of pressure. Ever notice how your potential for destruction increases when your in that state? This will only enhance Cthulhu's domestic policy.

Q) How does the Great Old One stand on the testing of nuclear weapons?

A) As long as Cthulhu does all the testing, it's a-okay.

A) The Great Cthulhu will see to it that those receiving redundancy pay will suffer greatly, well, more so than normal.

Q)Will he, as president, go jogging? (what a nasty thought!)

A) The Great Cthulhu is in perfect health, and due to its high metabolism and steady diet of human flesh, has no pathetic human need for exercise. In fact, those humans caught jogging with be destroyed immediately.

A) Well since that isn't actually a question, Cthulhu is taking the stance that it will not read anything, just look at the pictures.I don't agree on the great tentacled ones stance on the military.