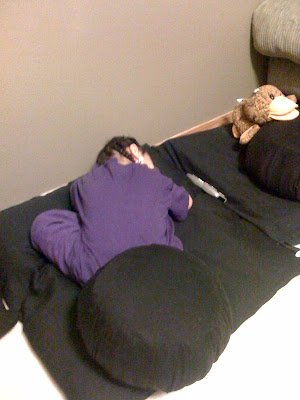 ZMH, the PoC and a duck puppet all joined me for the evening sitting.
I believe that the PoC is so close to Buddha hood that she was channeling Master Rinzai, cool points to whoever makes the connection on that one.

This morning I got up super early due to a burning in my stomach. It seems that the 800mg Ibuprofen have taken their tole on my belly. So I decided to sit with that... Now I am sure allot of people have heard about some meditation skills to be used when dealing with discomfort. Heck I know I have used them. The one I am most familiar with is turning attention to the pain and realizing it is impermanent an watch it arise and pass away...

Did not work this time. Sure the pain would arise, and arise, and arise some more until I could not stand it anymore and got up to take some antacids and drink a couple of glasses of water. When I sat back down I changed game plans and decided to take a southern zen approach. Yes that right. A little "Mindfulness" that I have been picking up from one of Thich Nhat Hanh's children's books... Breathing in, I know I am in pain, breathing out, I am taking care of my pain. And you know what... It seemed to work, or maybe it was just the antacids.

Any way after about an hour of sitting I got up had breakfast and tea then made the rounds to wake up my sitting partners, ZMH was kind enough to join me again and after the sitting I made her some toaster waffles before shaving and grabbing a cup of tea to go.


At work the admin shop smells like fear and pine oil. I know hope is not a method, but I do hope the fair well in this inspection. I look at it like if they fail we all fail. And I have never failed an inspection.

Update: It turns out it wasn't fear I smelled after all. The water cooler sprung a leak and soaked the CO's carpet. P~U
Posted by SlowZen at Friday, April 03, 2009

Maybe that pest Gregory, attacking you where you might feel vulnerable, then signing off with his peacy-weacy "gassho" symbol, touched something deep in you. How to deal with a stimulus like that, without giving yourself a headache or a heartache?

Just my opinion, but I think Ashvaghosha would say to see trouble as trouble, and walk away.

I have never been in the army but as a martial artist I made true friends who were straight and compassionate, whereas in "Buddhist" circles, I have come across some really malevolent trouble-makers. What does a "gassho" sign mean? To me, it very often carries the stink of phoney Buddhism -- a stink which you, Jordan, don't have.

Keep on keeping on,

I have tried to sit with my headaches and that is one thing I have not been very successful in doing..:(

BTW what time you wake up in the morning to do the sitting?

Hi Mike,
I think maybe Gregory saw trouble as trouble and walked away, I have not heard from him in a few days now.

As to the stink of phony Buddhism, I think I will choose to inhibit my negative chatter! But I am beginning to see why you have aversion to those gasshos, and not just in this particular instance either. Thing is this guy probably thinks he is quite sincere too.

Thanks for your encouraging words Mike.

MyoChi,
I have found that I can sit through most headaches and even sometimes a headache might get relived when sitting. Chemical burns in the stomach though, not so much.

On workdays I get up at 0410, on the days off I wake up just slightly before the sun rises unless I am really beat.

Have you been taking your pain killers with food? You must do that to keep it from tearing up your stomach! At least drink a little milk or something to coat it.

Thanks for the phone call yesterday. We're off this morning.
Love U!
Mom


Mom,
I have stopped taking it, but when I was I would always take it with food. I believe my reaction was a part of a cumulative effect caused by too many years of putting bad stuff in my stomach.

Be safe in your travels!
Love,
Jordan