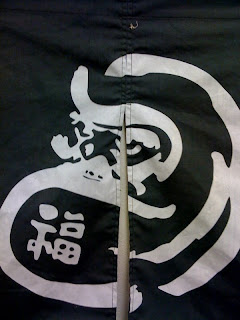 This morning the second bell must have been loud enough to wake up Hannah.
She got up while I was eating some cereal and drinking some tea and said something in a mixture of Japanese and English and sleep speak. I had to ask her to repeat it several times and then to say it in English. She sounded a little frustrated by the fourth time.
She said “Daddy, before you leave make sure you give be a good by kiss.” Then she went back to bed.

That is a pretty nice way to start off the morning.

I did. She smiled.

I had some thoughts on confusion/chaos that I thought would be great to blog about. But the moment is gone now and I had to go to a staff meeting so my thoughts on it are not so clear anymore. Gone back to chaos I suppose. But anyway I think the gist of the thought cloud was that everything comes from chaos or some such mental blather. I think it kind of made me happy or at least at ease, which might be a better kind of happiness.

During this morning’s second sitting I observed my mind chattering away, and observed my mind observing the chatter, and a thought came up, something like “What are you going on about then? I wasn’t even listening to my own thoughts anymore but they were still going on. I had gone somewhere else altogether, but in recognizing that, it was gone. And I am OK with that.

What if the first noble truth was: life is happiness…
Posted by SlowZen at Wednesday, October 29, 2008

Here's what came to mind as I read your post:

He also said, "There is no place to stand where one leaves the Truth. The very place one stands on is the Truth; it is all one's being."

(This probably came to mind 'cause I'm reading a book about Mazu and his heritage.)

Barr,
Thanks, I think I would have liked Mazu.

Hannah is such a sweetheart! Such a kind and gentle soul! And she obviously loves her Daddy very, very much!

HAPPY HALLOWEEN to everyone in your household! Hope the girls have fun trick or treating in their gramma made costumes!