Karma, Cause, and Effect re-revisited 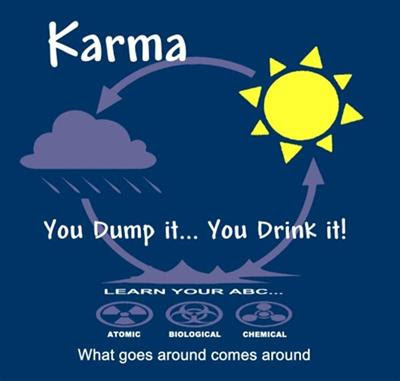 The other day a friend had brought up that old dilemma about predetermination regarding cause and effect.
I have been trying come up with my own words to express it and up until a few moments ago I did not know how so I fed him some of the stuff I had found in my research on the web and an answer I had received from Nishijima Roshi on the same subject.

But a few moments ago I had a bit of an epiphany.

To explain, for those who have not been following along, I want to first say that Karma is just a foreign word for action. It might be helpful to just drop the idea of karma all together. Put it out of your head.

Now we have Action, Cause and Effect. But it is out of order!
It should be Cause, Action and Effect!!!

You see the cause is everything that brought you here to this present moment. That’s it. Nothing mystical about it at all. Stuff happens. So we could say that the cause is just the past that led you to this present moment. Now here is the Important Question… In this present moment are things predetermined? Well yes and no. You see, because Iris is not sleeping when she should be it had the effect of me being awake. Because I was awake I was pondering a thought loop, which brings me to the present moment of typing away at this blog. Sound predetermined? Maybe so when it is written. But while I am typing this now I could have just rolled over and went to sleep. In the present moment anything can happen. Limited by all those causes for sure, but not totally predetermined. For example I find it doubtful that because of this explanation you will begin levitating off of your chair, but you may for just a moment see something the way I do, or not.

So to sum up:
Cause is just because. As in: this happened because… A side note that this can be a real rabbit hole to go down since we can’t always tell the cause.  Because might also be before's cause

Action is the choice you make in the present moment.

Effect is just what happens afterwards, and also the next cause.

I hope someone will find this helpful.

May you be free from suffering.
Jordan
Posted by SlowZen at Friday, February 08, 2008

It's not something I worry about too much. Your picture sums it up quite nicely though.

I think of it more like "If you go round kicking rocks your toes are gonna hurt".

No mystery or magic just one thing leading to another.

"If you go round kicking rocks your toes are gonna hurt"

Nice, yeah that works too.

Hello Jordan,
Succinctly Put!
Although Karma is always manifesting, it seems to really have focused herself on my neck. The cause -
everything that lead me to grappling without warming up yesterday- The Action defending my neck against a triangle choke - The effect - two manifestations immediate a little pain and I escaped which allowed me to grapple a little longer without passing out - Later manifestation increasing pain and no sleep.

Congratulations on being debt free!!!!! (House does not count ;-)! In this age of consumerism, this is a noble and worthy accomplishment.

Yamakoa,
Ha! I have had a similar experience with grappling! And also pain compliance techniques for non-lethal combat training. It seams that being able resist to some of those techniques was pretty cool until afterwards. Than I think oooooh I should have just complied!

The congratulations are a bit pre-mature, I have one more line of credit for 3.5k but it is interest free for a few more months. If we get that stimulus package in May I think I may be able to wipe that one out before it starts collecting interest. Not exactly helping the economy but I will feel more financially stable then and able to actually start “Saving” some money.

May you be well and happy!
Jordan

You summed this up so clearly for me. I was reading about this very topic last night in one of Nishijima Roshi's books. You helped me see this clearly -- so thank you.

On a related note your post also reminds me of the accidental nature of life Uchiyama Roshi has described in the book we are reading in book club.

The next karmic cycle:

"If your toe hurts from kicking rocks, stop!!"

Thanks Greg, I am finding myself heavily influenced by what Nishijima Roshi has pointed to. I guess you could say he has kind of sobered me up.

Opening The Hand of Thought is a wonderful book, I am glad you are finding it helpful. One of his Dharma Heirs has a lot of articles over on the Antaiji web site. I recommend them highly as well.

Sometimes you just accidentally kick a rock too, and find something extraordinary..

Thanks for explaining Karma, Jordan.

BTW, I've started posting again. Nothing special but I'm going to try to make it a part of my daily habit.

Starting reading "every Day Zen" last night but it will go slowly.

Mom,
Thank you for reading!

I hope you enjoy the book!