DO PEOPLE HAVE A DOGGIE NATURE? 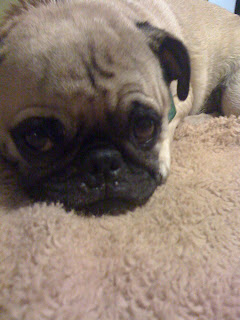 Yesterday afternoon the Marines were released early for the Columbus day weekend.
When I arrived home the wife and I not so quickly got the kids ready to go out shopping in order to get it done with for the weekend so we could spend those full days working on maintaining the house and lawn and whatnot.
So we stopped at a fast food point for a snack, made the journey over the bridge, went to the Japanese market, Trader Joe's, and because the time did not so good for trying to face traffic heading back north, we made a stop off at church. All in all it took a good half of a day from us leaving the house to getting back.
When we arrived home, There was a gift waiting for us. It had a distinct oder to it. It was certainly unexpected. The dog had pooped on the floor. conveniently on top of a cleaning rag that he had found somewhere. My first instinct was to check the back door, it was open and he could have gone out to poo if he needed too. Next I looked at the poo, to see if the dog might be sick. You can tell a lot about health by observing your poo you know. But the poo appeared to be healthy.
Finally I realized what the problem was. The dog knows, that if he poops on the floor that this is not acceptable behavior. He knows it is stinky. He knows it is messy. he knows it is a bit rude. he knows that people may be shocked to see poop on their living room floor. he also knows that this will get him attention. And negative attention is better than no attention at all.
Now I know not everyone has a dog. But a lot of us still have to deal with dog poop. This dog poop has numerous miraculous forms. It may be a problem Marine, or a seemingly angry spouse, or a vulgar Buddhist blogger. But all of these things often have the same root cause. They have experienced a lack of attention. And therefore are expressing their dissatisfaction by shitting on your living room floor. My prescription is to put the poop in the toilet and flush it away, or better burry it in the yard and work it into your garden, and then give some loving attention to the source of the poop whatever that might be.
Stepping out of the saturday morning bubble of pretentiousness, and getting back to work,
Jordan

May I add to this, our pup shits on the floor knowing its not acceptable, in order to avoid discomfort (the colder weather)

Sometimes she holds it until we give up and comes back in the house...waits for the right moment and shits right in the middle of the floor. We give her no attention over it and clean it up as you described.Its gonna be a long winter

I hope - shes got a scary condition right now that could go either way - Immune mediated meningitis.

Any ways. Is that pug your dog?

Ah yes, the pug dog is aversive to poor weather conditions too. But I have found that if I stand out in the misery with him he tends to go, just takes some patience. The pictured pug is the venerable Takuan Soho. To say he is mine like a possession just doesn't seem quite right. He's just part of the family that gets left behind on shopping trips, mainly due to his sometimes embracing social behavior. Ha!

Thanks for stopping in Dirk, A one handed Gassho to you as I press publish.

My dog tries to poop in the litter box. When unsuccessful, it is hilarious to watch her try to get unstuck from the covered box. When successful it is hilarious to see our two cats desperately attempt to bury the huge stinking load that was so unceremoniously dropped into their tidy little box.

So I think my dog has a kitty nature while my cats are just pissed off.

Out 15 month-old sits on her potty to read after crapping her pants. She will sit on her potty for 20 minutes, pants down, and read (blabber) outloud the books she brings with her.

Thanks for sharing the Dharma of Crap receptacles.

Jordan: I have to come to the venerable Takuan Soho's defense. He did manage land his deposit on a cleaning rag and off the Pergo™.
I'm sure the compromise seemed reasonable to him. Continue to work on your Pugin English..

Hey Jeff, Takuan has no need for a defense, the charges were dropped. As to my Pugin English, Do I hear you volunteering to me my editor?

Thanks as always, for your comments.

I followed the link to the vulgar Buddhist blogger, and what did i find but Hank Williams singing my favourite song. It struck me that sometimes it is by trawling through dirt, that we find a gem.