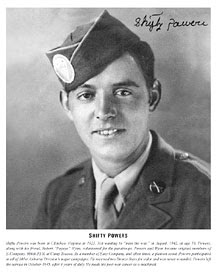 <i>I am not the original author of this, not sure who was. But I thought it
important enough to post. It's an e-mail post so sorry if the formatting
gets messed up.</i>

I know we get information faster than a flash now days emails attacking like
a bunch of screaming communist in Korea but take a break from the madness of
mikal Jacksons doctors dogs chew toy news and read this. Its good to respect
the ones who made this great country what it is. These are the great
Americans who worked thru the depression and fought WWII to return and
create the greatest economy in history, lets not piss it away...
We're hearing a lot today about big splashy memorial services. I want a
nationwide memorial service for Darrell "Shifty" Powers.

Shifty volunteered for the airborne in WWII and served with Easy Company of
the 506th Parachute Infantry Regiment, part of the 101st Airborne Infantry.
If you've seen Band of Brothers on HBO or the History Channel, you know
Shifty. His character appears in all 10 episodes, and Shifty himself is
interviewed in several of them.

I met Shifty in the Philadelphia airport several years ago. I didn't know
who he was at the time. I just saw an elderly gentleman having trouble
reading his ticket. I offered to help, assured him that he was at the right
gate, and noticed the "Screaming Eagle", the symbol of the 101st Airborne,
on his hat. Making conversation, I asked him if he'd been in the 101st
Airborne or if his son was serving. He said quietly that he had been in the
101st. I thanked him for his service, then asked him when he served, and how
many jumps he made.

I told him yes, I know exactly where Normandy was, and I know what D-Day
was. At that point he said "I also made a second jump into Holland , into
Arnhem ." I was standing with a genuine war hero . . . . and then I realized
that it was June, just after the anniversary of D-Day. I asked Shifty if he
was on his way back from France , and he said "Yes. And it's real sad
because these days so few of the guys are left, and those that are, lots of
them can't make the trip." My heart was in my throat and I didn't know what
to say. I helped Shifty get onto the plane and then realized he was back in
Coach, while I was in First Class. I sent the flight attendant back to get
him and said that I wanted to switch seats. When Shifty came forward, I got
up out of the seat and told him I wanted him to have it, that I'd take his
in coach. He said "No, son, you enjoy that seat. Just knowing that there are
still some who remember what we did and still care is enough to make an old
man very happy." His eyes were filling up as he said it. And mine are
brimming up now as I write this.
Shifty died on June 17 after fighting cancer.

There was no parade.
No big event in Staples Center .

No wall to wall back to back 24x7 news coverage.

No weeping fans on television.

And that's not right.

Let's give Shifty his own Memorial Service, online, in our own quiet way.
Please forward this email to everyone you know. Especially to the veterans.

"A nation without heroes is nothing."
Roberto Clemente

"We must not let our rulers load us with perpetual debt. We must make our
election between economy and liberty or profusion and servitude. If we run
into such debt, as that we must be taxed in our meat and in our drink, in
our necessaries and our comforts, in our labors and our amusements, for our
calling and our creeds...[we will] have no time to think, no means of
calling our miss-managers to account but be glad to obtain subsistence by
hiring ourselves to rivet their chains on the necks of our
fellow-sufferers...."

Thank you for this moving post, I will link it over at the BMS blog.

For those who may doubt, or wish to know the original author, it seems to be addressed here;

There's nothing shifty in this story at all.