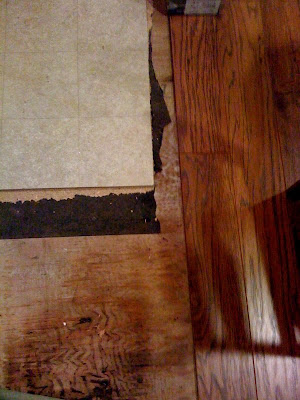 I spent the weekend not blogging as you loyal readers already know. I did however remove a lot of carpet and vinyl and partical board that was the old flooring in the common areas of my house and than I proceeded to lay down some new Pergo (tm) flooring. Oh and now I hurt. This evolution has been the best exercise I have gotten in over a year. It is a lot like doing a gazillion squat thrusts for eight hours a day for two days streight. Yeah my legs are burning.

Some other revelations over the weekend:

I bought a table saw. Table saws are really really nice to have when you are cutting things. They are so nice to have I have no idea how I ever managed to cut things without one. Oh yeah, I struggled. Clearly one of the coolest tool investments I have made in a long time. Power tools rock!

I also got a circular saw. While not nearly as cool as the table saw it is much easier to use when you can't bring whatever it is you want to cut to the table saw. Like the partical board you are trying to dislodge from the floor.

Also got a cool new razor knife. Not the kind of knife I would have invested in in the past since I don't think it would be too useful in combat, however it has got a really cool replaceable blade that I don't have to worry about sharpening every time I use it to open up another box of planks.

All of these tool purchases is still cheaper than hiring out someone to do the labor. Win!

Yes, I could have rented the tools and it would have been cheaper and I would not have had to be concerned about storing them later. But as a mortgage payer I have a feeling these tools will come in handy again and again. Heck they have already paid for themselves so why not.

Just ZMH and I sitting the last few days. The wife has not been feeling well and ZMI sleeps like... Well like someone who sleeps really heavily.
Posted by SlowZen at Monday, April 27, 2009

Here's a tid-bit I learned during my own recent flooring project. The surface of engineered flooring is made to be ultra-hard. It will dull blades extra quick. Ripping it with a table or circular saw (i.e., coming at it from the side) is better than "plunge cutting" it with a radial arm saw.

I always find such repetitive-step projects (e.g. rakusu stitching) fascinating. At the start, I think it's all too much to really finish. Then somehow, blam, I'm done & wondering what all the worry was about.

Jordan, I really like the floor you picked out! It is very good looking. We have been thinking of doing something similar here someday. That and about a doz other things we can't afford yet. ;)

Lauren,
Ah, I haven't acquired a plunge cut saw yet. Maybe one day I will have a project that requires it. They do look pretty cool though... So far my table saw has done the job with just one blade.

I have enjoyed this project quite a bit. I spend so much of my time flying a desk and telling other people what to do that getting to work with my hands has been really nice.

Jeff,
Thanks, I certainly prefer it to the stain-died carpet and worn out linoleum. This whole project was paid for bu the Bush tax cut/ stimulus check plan. I am kind of bummed that I have not heard of the new boss continuing that policy. It really helped me out.